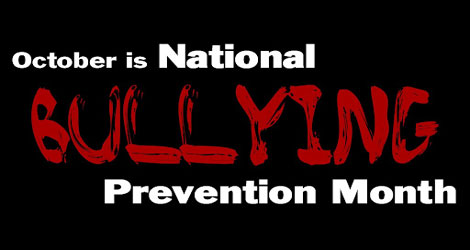 October is Bully Prevention Awareness Month. Bullying impacts children of all ages all over the world. Bullying can be physical, verbal, or happen online. School dropout rates and absences among children who are bullied are much higher than other students. In fact, more than 160,000 students in the USA stay home each day because they are scared of being bullied.

One out of every four students reports being bullied during the school year. Students who experience bullying are at an increased risk for depression, anxiety, sleep difficulties and poor school adjustment. The students who do the bullying are at an increased risk for substance abuse, academic problems and violence later in adolescence and adulthood. In fact, by age 24, 60% of students who bullied others in grades 6-9 had one or more criminal convictions. The students at the highest risk for both mental health and behavior problems are students who were both bullied and bullied others.

Not only does bullying lead to mental health problems, but it can also lead to suicide. There is a strong association between bullying and suicide-related behaviors. Youth victimized by their peers were 2.4 times more likely to report suicidal ideation and 3.3 times more likely to report a suicide attempt than youth who reported not being bullied. Students who are both bullied and engage in bullying behavior are the highest risk group for adverse outcomes.

The best way to stop bullying is to engage bystanders. Students who experience bullying report allying and supportive actions from their peers as the most helpful actions. Students also said that they find peer actions to be more helpful than educator or self-actions.

While October is Bully Prevention Awareness Month, it isn’t the only time we should talk about bullying. Bullying happens all year long and impacts people every single day. It’s important for us to not only talk about bullying, but to also work to prevent it from happening in the future.